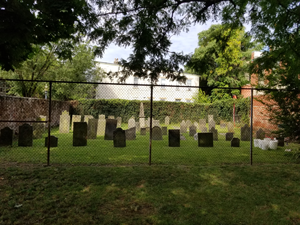 A driver on Central Avenue just west of downtown could be forgiven for missing the isolated little cemetery at the corner of Chestnut Street. Its vine-covered brick walls, two streetside trees and tall chain link fence make it blend into the industrial and urban redevelopment scene. A pedestrian on the sidewalk might spy the old wrought iron gate, locked against entry. Visible inside are several dozen Hebrew-inscribed headstones tipping this way and that. Since before any of us today were born, this was clearly a very old cemetery. What’s its story?

After the coming year’s efforts to uncover more of the history of Chestnut Street Cemetery and beautify its surroundings for visitors, Jewish Cemeteries of Greater Cincinnati plans to formally rededicate the sacred space with a major event in October/November of 2021. That will kick off a year-long 200th Anniversary celebration being planned by both Jewish Cemeteries of Greater Cincinnati and a city-wide set of programs being coordinated by Jewish Federation.

In preparation for the anniversary, the site will get a new and inviting “forecourt” along Central Avenue, informational signage about who is buried there and Cincinnati’s Jewish communal history, and an Ohio History Marker plaque, approval of which Jewish Cemeteries was recently notified.

2021 marks the 200th year of Jewish communal life in our city, although Jewish settlers arrived a few years earlier. Perhaps ironically, it is creation of a Jewish cemetery that traditionally establishes a place for Jews to live and prosper. In 1821, two of the just six Jewish men hereabouts, Joseph Jonas and Morris Moses, were asked by a man, Benjamin Lieb, to create a place for his imminent burial. He wished to be buried as a Jew, although anecdotally, he confessed to not having lived as one. He became the first Jewish person to die and be buried in this frontier city, thanks to the quick work of Jonas and Moses to purchase land from philanthropist Nicholas Longworth for this very cemetery. Read more about it here.

The plan is to tackle Chestnut Street improvements, as Dr. Schwartz explains, with “…a two-phase approach. The upcoming year’s physical improvements are Phase One. That has already begun with removal of the vines from the brick walls, which will be restored. We’ll replace the chain link with a wrought iron fence that matches the historic gate. We want to create a beautiful area out front with seating, smooth pavers or bricks, landscaping and lighting, so that visitors can comfortably gather while learning about the history.”

Dr. Schwartz reports that the cemetery’s next-door neighbor, ATA Beilharz Architects, donated their work on several plans for the cemetery’s “forecourt” from which the committee will make a final choice. Collaboration has been maintained throughout the planning with Betts-Longworth Historic Group’s Board, who are incredibly supportive of Jewish Cemeteries’ efforts to enhance the site and share its history.

Another amazing thought: Cincinnati’s Chestnut Street Cemetery was the very first Jewish cemetery to have been established anywhere west of the Allegheny Mountains. Here, it stands as the initial and perhaps most solemn of many Cincinnati institutions attributable to our city’s Jewish residents in the 200 years since. The breadth of those achievements will be celebrated during the community’s year-long observance, but on a more personal level, the little cemetery’s rededication invites us to learn also about the humble lives of the people interred there.

To that end, genealogical and historical research is underway by an endlessly curious team of women from the committee, including Marlene Ostrow, Shelly Gerson and Mimi Daria, coordinated by Jewish Cemeteries’ Sarah Strouse. What they uncover and compile will be shared in a series of features and interviews in coming months. Some of the findings will be included in signage in the cemetery’s new forecourt. Then, the stories will enrich educational materials for tours and school trips to Chestnut Street Cemetery.

Some stories are of long, inspiring lives—ocean voyages, important offspring, even the founding of the historic K. K. Bene Israel, now Rockdale Temple. But most are stories of hard lives lived in observance of Jewish customs, as much as was possible in a tiny western community, but lives cut short by untreatable illnesses and too often, by the mitzvah to procreate. Mimi Daria cites, “Probably 21 or 22 women in the cemetery, some whose actual names we don’t know yet, died in childbirth.” Indeed, a cholera epidemic here in the late 1840’s filled up the cemetery such that it had to close to burials in 1849. “Brothers and sisters, infant twins, whole families passed away within hours or days of each other.” It is a history to which Americans are newly sensitized.

And what about Phase Two? That will be the painstaking conservation work necessary to stabilize and preserve the actual monuments, some of which are in pieces and all of which have been deteriorated by the elements over two centuries. David Harris, Executive Director of Jewish Cemeteries, points out, “Phase Two will begin as soon as we secure funding, and we’re eager to do this work! But it will require hiring experts at historic restoration, which is very costly, and therefore will necessitate targeted fundraising. The extent of the cost definitely lies outside the realm of our usual budget, but fully within our mission as an organization dedicated to preserving and honoring the resting places of our people.”

Meanwhile the excitement is building around the improvements that will lead up to the festive rededication event for Chestnut Street Cemetery next fall. An impressive committee has already convened to plan all sorts of wonderful surprises for that occasion, co-chaired by Jan Armstrong Cobb from the Jewish Cemeteries Board of Trustees and Sharon Spiegel, and including JCGC Founder Ed Herzig; Jewish Cemeteries’ Trustees Susan Brenner and Sandy Kaltman; and community leaders Chrissie Blatt, Sari Goldhoff Small, Dan Hoffheimer, Dick and Mona Kerstine, Rachel Loftspring, and Cynthia Rosen. “The response to our call for organizers has been amazing, and we’re so grateful to have this stellar committee planning the rededication and year of programming!” adds David Harris.