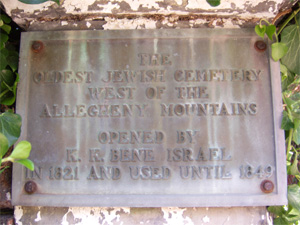 It’s a small town . . . with a population of just 9,642 people. It’s a pretty rough-and-tumble place, made up mostly of people who wanted to get away from the big population centers. They were willing to come to a place where most people were farmers, although both a merchant class and an intelligentsia were beginning to emerge by 1821.

It was an accepting community, which even tolerated six men of Jewish persuasion. Of course, it wasn’t possible to live a traditional Jewish existence in such a place, where Saturdays were the big market days, and there weren’t enough people to form a minyan.

Benjamin Lieb – or perhaps it was Laib or Lape – was in his 70s, and not doing well. He called Morris Moses and Joseph Jonas to visit him, and explained that he expected to die soon. He had married and lived his adult life as a Baptist, he told them. . . but his wife had preceded him in death, and his daughters had moved away. He wanted to be buried as a Jew, according to the traditions of his family in the old country, and he wanted to buy a grave in the Jewish Cemetery. 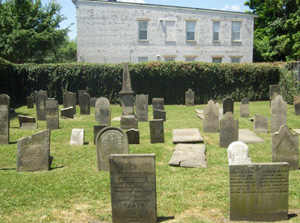 But there was a problem: the thriving little city of Cincinnati, on the far Western U.S. frontier, with only six Jewish men, didn’t have a Jewish cemetery. It didn’t even have a synagogue.

Jonas and Moses realized that they, too, would die someday, and they went to the largest landowner in the area, Nicholas Longworth, and negotiated the purchase for $75.00 of a 25 x 50 foot plot way out on the western edge of the community, on what later became Chestnut Street, 75 feet from the corner of what later became Central Avenue. 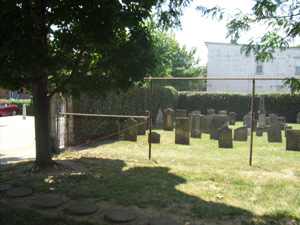 The same English immigrants, Joseph Jonas and Morris Moses, who bought the land for the cemetery, were among the small group of Jews who, in 1828 — seven years after the cemetery was created — formed Kehal Kodesh Bene Israel – the Holy Congregation of the Children of Israel – the first Jewish congregation west of the Alleghenies. K.K. Bene Israel today is known as Rockdale Temple.

By 1850, the population of Cincinnati had grown to more than 115,000 people, and Cincinnati was competing with San Fransisco to be the second largest Jewish Community in the nation. Cincinnati fell victim to a terrible cholera epidemic which caused thousands of deaths from 1847 to 1850, and as a result, Chestnut Street became filled. Between 1821 and 1849, when the last burial took place, some 85 Jews were laid to rest there.

As we look at it now, a brick wall surrounds two sides and part of a third side, and across the front is a chain-link fence that is actually owned by the City of Cincinnati. The brick wall was erected around 1873, and is not in good condition. The cemetery has a gate which is kept locked (the only one of JCGC’s cemeteries that is locked). Any one wishing to visit the cemetery may request the key from the JCGC office, and as the cemetery is very small, you can see it very well through the fence without being on the grounds.