There has been exciting news for Ethan Zied, the Dayton area Eagle Scout who has made it his job to get a veteran’s marker at the grave of every Cincinnati Jewish veteran and ready for flag decoration going forward.

On February 8, 2020, his project was awarded the Glenn A. and Melinda W. Adams National Eagle Scout of the Year award for Dan Beard Council (Greater Cincinnati and Northern Kentucky) at their annual Council-wide Eagle Scout Court of Honor, which was held at the Masonic Temple in Cincinnati. According to Ethan’s father, Eric Zied, 366 prospective Eagle Scouts in the Council were eligible for the award in 2019. The project is now being considered at the Regional level, competing against winners from 68 other Councils covering parts of 16 states.

Background: Ethan got the idea a few years ago after seeking to decorate the grave of his maternal grandfather, a Vietnam veteran, in the Montgomery Cemetery and noting that veteran markers were nearly non-existent there. Ethan felt that identifying and honoring all the Jewish vets was the right goal. So, for his Eagle project, Ethan created a database of veterans and those buried in the cemeteries operated by Jewish Cemeteries of Greater Cincinnati (JCGC), in particular. Ethan and his team of volunteers searched over 20,000 burial records from 1942-2018 and were able to identify nearly 2,500 veterans buried in Cincinnati’s Jewish cemeteries.

Since the data project’s completion, Ethan and Jewish Cemeteries have been raising money to buy grave markers, mapping out the targeted graves in multiple cemeteries using Ethan’s database, and recruiting volunteers to help place markers by the veterans’ graves. To date, they have raised over $7,000 from anonymous donors and over $3,500 via a GoFundMe campaign and marked about 750 graves. The goal is to raise $25,000 and have all veteran graves marked by Memorial Day 2021. 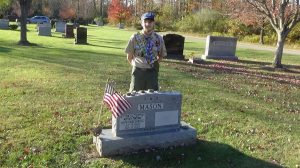 To add your support to Ethan’s project in collaboration with Jewish Cemeteries, go online to www.gofundme.com and in the search bar enter “Ethan Zied” or “JCGC Jewish War Veterans Grave Markers.” All donations come to JCGC targeted for Ethan’s project only and are tax deductible.