Home / The History of our Cemeteries

The History of our Cemeteries 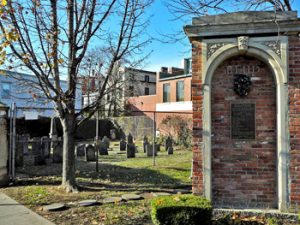 The story has long been told of the founding of the “first cemetery west of the Alleghenies” located in downtown Cincinnati on Chestnut Street. In 1821, Benjamin Lape, or possibly “Leib,” was on his deathbed and called for a Jew to come to his bedside. Lape admitted to being Jewish, and his dying wish was to be buried according to the rites of his ancestors. This necessitated that the tiny Jewish community create a cemetery – and fast. They went to a man named Nicholas Longworth and bought a property that was 50×25 feet for seventy-five dollars.

They certainly knew to whom to turn. Longworth owned a tremendous amount of property around Cincinnati. In fact, he was on his way to becoming one of the largest landowners in America. By the year 1850, he was second to only William Astor of New York in the amount of taxes he paid to the U.S. government.

Longworth had come from very humble beginnings in New Jersey to learn law in Cincinnati, which led to land speculation and the making of his fortune. He is remembered as an eccentric man, with many interests which he pursued vigorously. He was a patron of art, helping many an artist financially, among other ways, and turned Cincinnati into a center of culture. He was a horticulturist who tended his own garden and made important discoveries regarding strawberries and blackberries. He was a viticulturalist who was the driving force in making the Cincinnati area America’s first major wine producing region, and became known as the father of American winemaking. A case of wine sent by Longworth to the poet Henry Wadsworth Longfellow prompted Longfellow to pen a poem of gratitude about the wine, which is the source of Cincinnati’s nickname “The Queen City.”

One of the eccentricities of Longworth was where he chose to give his charity. Stories are told about Longworth turning down people who asked on behalf of worthy causes simply because they were causes that others would donate to. He wanted to give his charity to those whom others looked at in disdain—the drunks in the gutter and the beggars who didn’t want to work. Longworth did give to many other causes as well, such as furthering art and other cultural institutions, and he donated the land later to be named Mt. Adams towards the building of an observatory.

Noteworthy, then, is his donation to the Jewish community. After the original purchase in 1821, the cemetery needed to expand, and in 1826 Longworth donated another small parcel of land adjoining the original lot. What remains unknown is this eccentric philanthropist’s intent in his donation. Was it a negligible amount of land to Longworth? Later events would suggest otherwise. In 1838 the cemetery would expand for a third time, a similar size to the second expansion, and Longworth sold that bit for five hundred dollars. Considering that the third expansion cost five hundred dollars, that also raises questions about the original purchase. Was Longworth’s 1821 sale for seventy-five dollars an act of magnanimity, in which he decided to forgo his usual profit margin out of kindliness to the fledgling Jewish community?

Longworth thus continues his tradition of leaving us to speculate his motives. It is quite interesting to note that the man who left such an indelible mark on Cincinnati left his mark on the Jewish community, as well.