Situation: You are charged with safeguarding precious community records collected over 200 years. You learn that the digital platform which supports your antiquated data software will go out of existence on a date not far in the future. Your funds are already stretched.

What’s at stake: Your basic business functions, but more importantly, your data: burial records of 35,000 beloved deceased members of the Cincinnati Jewish community, each bit of data painstakingly digitized from antique books over the last quarter century. And there are reams of precious documents that have never yet been digitized.

What do you do?

Jewish Cemeteries of Greater Cincinnati, responsible for 25 cemeteries in this region, was facing this situation back in 2019. The first step was to find and invest in new, cutting-edge cemetery data software. That done, the next challenge was to customize it to not just store data, but to perform many more functions and services for Jewish Cemeteries and the community, and to keep working far into the future. Crucially, at the end, data from the old software would need to be “migrated” to the new system—extremely dangerous territory—and all done while performing Jewish Cemeteries’ sacred work in providing for the community’s burial needs.

Jewish Cemeteries needed a very special person to take on this critical transition, a “unicorn” who could overcome all tech obstacles, both known and unknown, while caring deeply about our community’s history. That unicorn is Sarah Strouse, a remarkable woman who started as Jewish Cemeteries’ Office Manager in January 2020. Sarah has finally seen her new software “go live” just a few weeks before the recent September 26, 2021 rededication of Chestnut Street Cemetery, culminating over a year of problem solving. 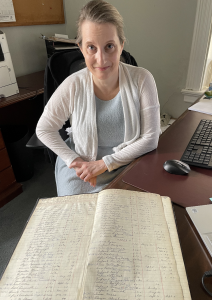 Back in early 2020, Sarah oriented herself to all of her office manager functions and procedures and then immediately began collaborating with IT engineers of the new software’s designers, OpusXenta, as far away as Australia. “A database migration is an incredibly challenging process. Sarah’s background made me confident that she was the right person to manage this project,” said Executive Director David Harris. “There was so much riding on success, especially in light of also preparing for the big bicentennial celebration of Cincinnati’s Jewish community, at the same time.”

No one is happier than Sarah Strouse to be doing this work, which she says combines everything she loves most: tangible history, genealogy, teaching, meeting and helping people, storytelling, and problem-solving. When she learned details of the open position’s demands, her excitement grew such that she informed David Harris, “I think you need to give me this job.” Sarah says flatly that she loves her job so much, that “I’m spoiled. I cannot work anywhere else ever again.”

Sarah’s title, Office Manager, gives little clue to the wide range of skills and passion for the work that Sarah brings. Arriving with two Education degrees, experience in both teaching and school administration, in both secular and Jewish higher education, expertise in data-driven decision making and data migration, historical and genealogical research, as well as recent entrepreneurship, Sarah clearly has the versatility for her demanding and unpredictable workload.

After months of preparation, early in 2021 the data migration went off, as Sarah says, “relatively seamlessly” thanks to months spent “cleaning” the data and tweaking the programming. She is satisfied that the new database “has come in as a strong and clear tool.” Sarah gets excited talking about all that is possible now. The new system incorporates a ‘first’ for OpusXenta: the ability to record and thus later search for the Hebrew names of decedents and even their parents. It will also be possible to generate yahrzeit dates for most individuals buried in our Cincinnati Jewish cemeteries.

But, as always for a database, you can only get out what you have put in, and so much remains to be done. Here Sarah launches into her “show and tell” mode perfected during her years as sole proprietor of Nerd Girl Tours, sharing Cincinnati’s historic sites with tourists and locals. She pulls out a very large antique-smelling book, opening it to a random page of what looks like calligraphy. It is the recorded history of our Jewish ancestors here—names and dates and places.

“Data” for all of our area’s 25 Jewish cemeteries, for most of two centuries, was entered by hand in flowing script into books or cards kept by generations of congregational record keepers. Maps of burial sites were similarly made and kept by hand. Those actual records came to Jewish Cemeteries when it began in 2008. Jewish Cemeteries has acquired the first of several fireproof vaults to assure safekeeping of these extremely delicate books, rolled maps and eventually many other irreplaceable archival materials placed in its care. After the materials have been digitized and culled for relevant data for its records, Jewish Cemeteries hopes they can be transferred to the American Jewish Archives.

Until now the genealogical search engine embedded in Jewish Cemeteries’ website (jcemcin.org) could provide just the few isolated facts concerning each of about 35,000 Jewish decedents, from those mostly-handwritten entries: date of death, often the date and place of birth, and the burial location. These facts were meticulously entered into Jewish Cemeteries’ old digital database one-by-one over the past twenty-five years. Beyond that, however, the individual’s genealogical record could provide only question marks. Nothing could connect their record to that of their parents, their grandparents or any siblings buried in our cemeteries. With the new software’s greater cross-referencing capability, the task going forward will be to build those connections and make them all searchable. This goal is complicated by the fact that many family names in Cincinnati cemeteries and even surnames within families recur over generations.

Tracking down familial relationships in order to link a decedent to any related digital records will take hundreds of hours of patient detective work. Sarah dreams of training what she calls a volunteer “cadre of nerds” to piece together these puzzles as well as to digitally scan all the photos, clippings and archival materials entrusted to Jewish Cemeteries over the years so that they, too, can be digitally linked to family trees. Community members will be asked to share their own family research to help build Cincinnati’s Jewish family tree.

David Harris looks forward to the time when he can turn Sarah loose to start building her “cadre of nerds” and begin linking family members in the database. “We are anxious to aid genealogical research. We are already generating geo-tags for the graves in our cemeteries so that eventually visitors will be able to find any grave via Google mapping on their phone or computer. But realistically we’re talking 2022 to tackle the nitty-gritty historical work in earnest. Meanwhile, we have a whole year of great Bicentennial programs to create and offer first.”

What energizes Sarah Strouse to do her cemetery work with such warmth, humor and drive is feeling that her job is at its core so “Jewish.” “Remembering. This is what makes us Jewish—we don’t forget where we came from. This is the work I get to do every day. I’m doing the work, so someone in a hundred years can know what happened here, who the people were, what they did. We’ve been here for 200 years, and we’ll be here at least 200 more.”