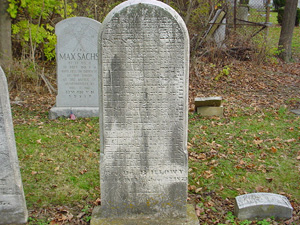 Rabbi Bernard Illowy, 1814 – 1875, is interred in Adath Israel Cemetery in Price Hill. Descended from a family of religious scholars, he was born in Kolin, Bohemia. He studied in Kolin and Pressburg, where he received rabbinical ordination. He subsequently received a PhD and continued his rabbinical studies in Hungary and Italy before returning to Bohemia, where he taught for a while. Because of suspected sympathies with the Bohemian rebels opposing the Hapsburg Empire, he was precluded from filling a rabbinical position in his native land, and consequently he came to the US in 1848.

In the US, he served as the rabbi at Shaare Zedek in New York City, Rodeph Shalom in Philadelphia, United Hebrew Congregation in St. Louis, Kneset Shalom in Syracuse, Stadt Shule in Baltimore, and Shangarai Hased in New Orleans. He was known as an eminent Talmudist, a powerful preacher, and a strict adherent of Orthodox Judaism. He had the distinction, in his day, of being the only rabbi with a thorough Talmudic education and a university training to stand for the cause of Orthodoxy. Rabbi Illowy’s mastery of halacha became renowned throughout the United States, and halachic questions were addressed to him by pious Jews in America, looking for religious guidance.

When Rabbi Illowy started at Shangarai Hased in 1861, he succeeded in increasing the level of religious observance significantly, but by the time the Civil War ended in 1865, the synagogue membership had voted to institute Reform practices. Rabbi Illowy left to come to Cincinnati to assume the pulpit of Sh’erith Israel, a newly established Orthodox congregation. He engaged in fierce, polemical warfare with the leaders of the Reform movement but was also great friends with these leaders. Rabbis Wise and Lilienthal gave eulogies at his funeral. He died in an accident when the axle of his buggy broke and he was thrown to the ground, leaving him paralyzed.