Adapted from a talk by Stephen D. Strauss to The JCGC Board of Trustees
December 7, 2011 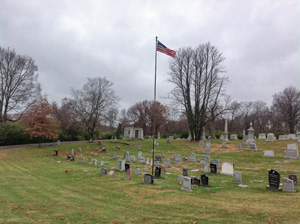 Judah Touro Cemetery Association, Inc., was incorporated in 1855 or 1856 (more about that later), and is located on Sunset Avenue in Price Hill. Anyone who visits this cemetery will note that it is atop a steep hill. I have often imagined the funeral processions in the days before motor vehicles. Remember, the first burial was in 1856! A horse drawn wagon bearing the casket would depart from the basin of the city. After some hours, the procession would arrive at the entrance of the cemetery. Then, after travelling all the way from downtown, the horses would have to pull the wagon up Judah Touro’s steep hill. Oh, those poor animals!

All of the Jewish cemeteries of Greater Cincinnati are different. One thing about Judah Touro Cemetery that is unique is that it is named for a person.

Judah Touro was born June 16, 1775, in Newport, Rhode Island. His father was hazzan or cantor of Newport’s Portuguese Sephardic synagogue. The American Revolutionary War destroyed Newport’s prosperity and Judah’s childhood was marked by poverty. Judah’s father, Isaac, was a Tory, and the family stayed in Newport after the British captured the city. The Touros were then dependent upon the charity of the British troops, who eventually helped them to relocate to the then British island of Jamaica in the West Indies. After Judah’s father died in Jamaica in 1783, his mother took Judah and his siblings to Boston to live with her brother, Moses Michael Hayes, a merchant who helped found Boston’s first bank. 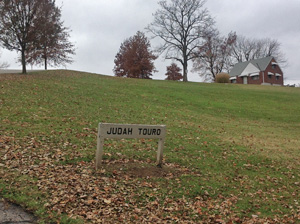 In 1801, Judah Touro unexpectedly left Boston and moved to New Orleans where he opened a store selling soap, candles, codfish, and other New England products. At least one history book indicates that Judah departed Boston because his Uncle Moses refused to permit him to marry his first cousin, Catherine Hayes. In any event, Judah never married.

During the War of 1812, Judah fought as a volunteer under General Andrew Jackson. On January 1, 1815, during the Battle of New Orleans, Judah was severely wounded and near death but over the next year a close friend nursed him back to health.

Following his recovery, Judah resumed building his business interests in shipping, trade, and real estate. Touro made a point of never mortgaging currently owned properties to acquire new ones and he lived a simple life in a small apartment building. He remarked, “I have saved a fortune by strict economy while others have spent one by their liberal expenditures.”

Touro’s lasting fame was as a philanthropist. He contributed $40,000, a huge sum at the time, to the Jewish cemetery in Newport, Rhode Island. Judah also donated the final $10,000 to complete the Bunker Hill Monument in Boston.

He continued to give to many charities, Jewish and non Jewish alike.

Judah died on January 13, 1854, in New Orleans and was buried in Newport, Rhode Island.

After a few small bequests to friends and family (including Cousin Catherine Hayes), the bulk of Judah’s large estate was left to numerous Jewish, Christian, and secular charities.

The first burial at Judah Touro Cemetery in Cincinnati was a 1 year old “Infant Klein,” first name not listed, who died February 1, 1856. This was two years after Judah Touro died.

In my research I was unable to discover a specific bequest in his will to found a cemetery in Cincinnati, although I did find a gift to Jews (Not Jewish) Hospital Cincinnati, Ohio.

Nevertheless, I believe that Judah Touro helped found our cemetery or, if that was not the case, the cemetery founders decided to honor this very charitable man by naming the cemetery after him. 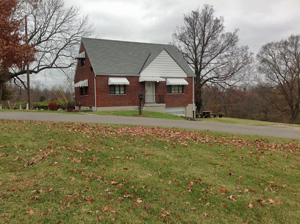 There is a bit of confusion about when the cemetery was incorporated. Some old documents and seals said 1855; others 1856. Some years ago the Judah Touro Board made an inquiry with the Ohio Secretary of State’s office. We learned that while today, corporate records for the entire state are kept in Columbus, in the 1850’s these records were located in the county courthouse where the corporation was situated.

Those who have lived here a long time or studied Cincinnati history may have heard about the 1884 Courthouse fire during riots in Cincinnati. The incorporation records of Judah Touro Cemetery were destroyed in the fire, so the exact date of the Cemetery’s incorporation is lost in the mists of history.

I mentioned that one way the Judah Touro Cemetery is unique is that it is named for a man. The other is that Judah Touro is not, nor has it ever been, affiliated with a temple or synagogue.

Until almost the time of World War I, the minutes of the Judah Touro Board were kept in German, and many of the older monuments and tombstones list places of birth in Germany. In the past 20 years or so, quite a few recent Russian immigrants have been buried at Judah Touro.

Today, Judah Touro is the only JCGC cemetery that has a caretaker in residence. Mike and Mindy Masminster are the current residents of the house on the property, following the tradition of several other Masminster caretakers over the years. Mike provides security services for all the JCGC cemeteries in Price Hill, and his efforts are greatly appreciated.