Guardians are CYJL Legacy donors who have committed a gift to support JCGC for future generations. JCGC wanted to show its gratitude– in person– to our living generations of Guardians. In honor of our generous Legacy donors, on 2/7, JCGC sponsored two, back-to-back films from the recent Mayerson JCC Jewish & Israeli Film Festival. The first film short, the Gravedigger’s Daughter, was followed by the full-length feature film, Home Port.

JCGC had also invited committed friends of the organization and that evening, 23 supporters were part of the 125 Jewish-community audience members in attendance. Moviegoers also received a small, candy bag, prepared by Board member Susan Brenner, with the JCGC website address pre-printed on their tags, encouraging use of JCGC’s genealogy resources.

Prior to the screening, Marketing Committee Board member Marlene Ostrow thanked all involved and invited attendees to consider making a CYJL gift, as well. She spread the word to the crowd about the important role that JCGC plays in our community, promoting the great online resource that JCGC has become for (Jewish) genealogy. Specifically, JCGC hopes that the community will come to see the new genealogy display on the family of Charles Stix at the Mayerson JCC in April. Her final pitch was to stay tuned for an upcoming lecture series, beginning in October of this year.

To publicly honor all of JCGC’s generous and visionary Legacy donors, an updated honor roll poster of CYJL’s Guardians was on display in the lobby of the theatre that evening. Below, we have reprinted a copy of that JCGC honor roll poster. 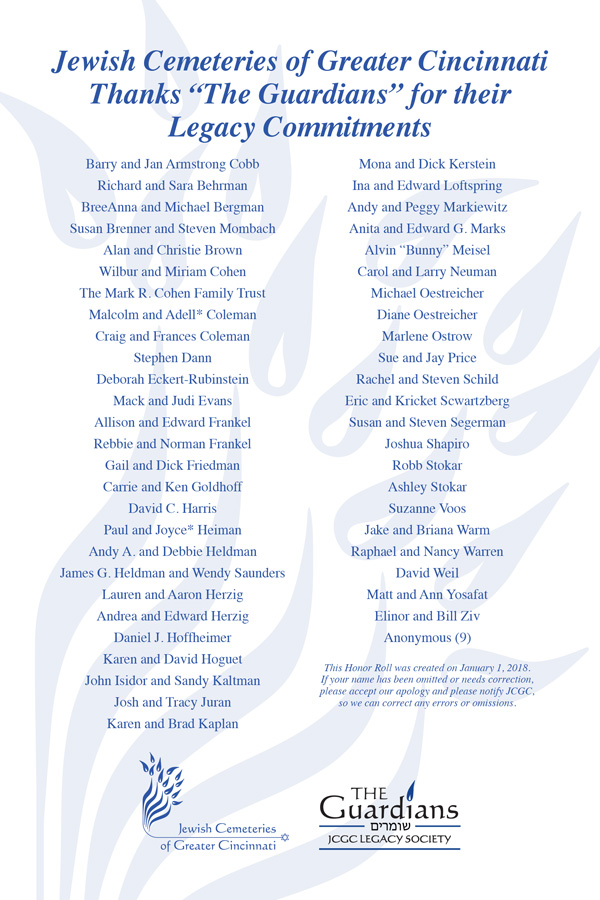