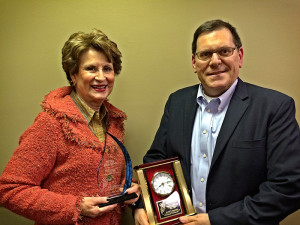 Brad Kaplan thanks Mona Kerstine for her service on the Board

Outgoing President, Brad Kaplan, thanked the retiring trustees for their service. Two of the retiring trustees, Dick Friedman and Andy Markiewitz, had served on the Board since the inception of JCGC, and Mona Kerstine was also a valued contributor. David Hoguet, Executive Director, thanked Brad Kaplan for being a valued partner and for all the contributions he made during his two – year term as President.