Home / Honoring the Coleman Family at Voice of Giving

Honoring the Coleman Family at Voice of Giving 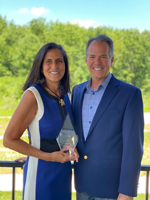 Every year, Jewish Cemeteries honors one or two or our Guardians at the annual Voices of Giving event, hosted by the Greater Cincinnati Planned Giving Council. The event helps bring awareness to planned giving, nonprofit organizations, and the amazing donors who have made legacy commitments from across the city.

This year, the event was held online, with the awards and a gift basket being delivered to the Coleman’s home, to enjoy while they watched with their family. Community members logged on and wished them “Mazal Tov” in the chat room.

Fran is originally from Newburgh, NY, where she grew up watching her parents and grandparents in leadership roles and volunteering across the community, all of which left an early impression on her. Fran moved to Cincinnati for a job and got involved as a volunteer with the Jewish Federation, where she met Craig. Craig was born and raised in Cincinnati and is the son of Malcolm and Adell Coleman. Craig’s parents and grandparents belonged to Adath Israel Congregation and Craig has fond and inspiring memories of watching them be involved in the community, giving generously of their time and resources and providing for others.

Fran is currently a Co-Chair for Planned Giving & Endowment for the Federation which includes its initiative “Create Your Jewish Legacy” and she’s served many years as a board member in addition to being Chair of Women’s Philanthropy. Craig is currently an Adath Israel Vice President and has led its very successful Legacy program efforts. He has also served on the board of Jewish Vocational Service (now JVSCS) as Treasurer and the Hilb Education Grant Committee, and many other community agencies. Their legacy commitment includes several of these organizations as well as the Jewish Cemeteries of Greater Cincinnati and the Nancy & David Wolf Holocaust & Humanity Center.

Craig’s parents supported the merger of all the cemeteries that created Jewish Cemeteries of Greater Cincinnati in 2008. When Mal and Adell passed, Jewish Cemeteries received a generous legacy gift from them, to help continue its mission to serve the burial needs of the Greater Cincinnati Jewish community with care and dignity and to honor the resting places of our people. Mal and Adell also made other legacy gifts to the community, and were most proud of their gift to the Nancy & David Wolf Holocaust & Humanity Center where the Holocaust Gallery is dedicated in their names.

When asked why they made a commitment to JCGC, Fran and Craig said, “We are fortunate to be in a position to give back and encourage others to make their own philanthropic declaration. Our involvement is inspired by the saying: “No one remembers what you did for yourself, but what you did for others.” Their leadership in our community-wide Create Your Jewish Legacy program has been remarkable. Their commitment to legacy giving and passing on values through their work now and their future gifts is inspiring. It is clear that the values Fran and Craig learned from their parents are being lived by them today and will go on to inspire their children and future generations.