Home / History of Our Cemeteries

History of Our Cemeteries

In this newsletter, we take a look back into JCGC’s archives at the history of the Price Hill cemeteries on one side of Sunset Avenue. This history was prepared by one of JCGC’s Founders and previous JCGC Board member Ed Marks. These were remarks delivered at a Board meeting, so they were written for that purpose, as opposed to publication.

As we all know, the first Jewish congregation west of the Alleghenies was K.K. Bene Israel, formed in 1828 – known today as Rockdale Temple. At its founding, it was an Orthodox congregation, although with a New World perspective. Formed by the city’s first Jews – who hailed from England – they had become accustomed, as merchants who relied on the general community, to reassess the commandments, and keeping their stores open on Shabbat.

At about the same time, a young man named Max Lilienthal, born in Munich, took his rabbinic training to Russia, where he became an educator who preached, of all things, sending Jewish youngsters to secular schools during the day, and then to Shul for religious education in the late afternoon.

Lilienthal moved to New York in 1844, where his reformist ideas did not sit well with either of the congregations her served there over the next 10 years. In 1855, he moved to Cincinnati, to assume the posts of Associate Editor of The Israelite, and rabbi of Kehal Kodesh Bene Israel. He promptly got active in secular civic activities – such as the Board of Education and the Board of Trustees of the Cincinnati University – and introduced even more radical interpretations of Hallakha at Bene Israel.

Well, that didn’t sit well with everyone. In 1857 – two years after Lilienthal arrived – a group of more traditional Bene Israelites withdrew from the temple, and formed Congregation Sherith Israel. The new congregation hewed to a far more traditional approach to Judaism than Lilienthal’s, and as new Jewish settlers came to town, a significant number of them joined Sherith Israel. 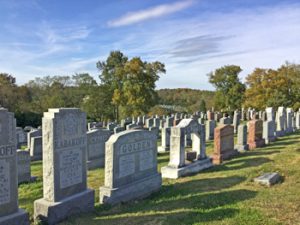 Its primary location for many years was downtown. An aside: About 1985, my good friend Owen Findsen, then art editor of The Enquirer, looked out his window, and saw what looked like two spires. We had lunch that day, and he walked me into Lodge Alley. When I looked up, it was obvious that this was, indeed, a synagogue building. Research by Rabbi Abie Ingber established that this was the home of Congregation Sherith Israel, built in 1860. It’s still there, if you want to look for it, and it has a plaque on the side. Today, it houses several condos.

Back to our story.

Sometime in the late 1850s, Adath Israel and The Love Brothers Congregation – now Congregation Ohav Shalom – bought land along Sunset Avenue. They sold a portion of it – a buffer between the two larger congregations – to Sherith Israel.

In 1906, Sherith Israel merged with Ahabeth Achim, and the merged congregation moved out to the far suburbs – Reading Road, near what is now Martin Luther King Drive. In 1931, this congregation merged with K.K. B’nai Yeshuron, which acquired the name Isaac M. Wise Temple, and built a modern new suburban center at Reading Rd. and North Crescent.

As a result of the 1931 merger, the Sherith Israel cemetery in Price Hill became part of United Jewish Cemeteries – and, of course, is now a part of JCGC.