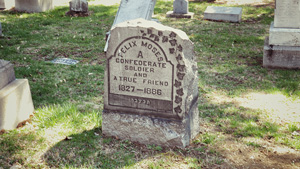 Felix Moses was the hero in the book, “Felix Moses, the Beloved Jew of Stringtown on the Pike”, written in 1930 by John Uri Lloyd, a native of Boone County. Moses (1827 – 1886) came to Boone County, Kentucky in the 1850’s, an orphan whose family had been persecuted in the old country.

“Mose”, as he was known to young and old alike, became a peddler, dealing in produce, furs, hides, trading for whatever the farmer had to offer. From a pack peddler, Mose became the owner of a horse and a covered spring wagon, carrying a full line of household wares, yard goods and tools.

While he never forsook the faith of his forebears, Mose was a frequent visitor at the religious services of the gentiles and contributed financially to country churches throughout Northern Kentucky. At the time of his death, he was a member of Good Faith Lodge 95, Free and Accepted Masons.

Moses put his career as a peddler on hold during the Civil War, deciding to enlist on the side of the Confederacy so he could serve with the son of one of his customers, a concerned mother who was quite anxious about her youngest son going to war. He served under General John Hunt Morgan of Lexington and was captured by Union forces in December 1863, serving the rest of the war at Rock Island Prison Barracks in Illinois.

In 1886 Mose was returning by packet boat from a business trip to Louisville when his body was found washed ashore at North Landing, below Rising Sun, Indiana. Citizens of Florence identified the body as that of their friend, Felix Moses. According to the Boone County Register, John Cox and John Henderson were on the packet boat and had gotten off at Belleview, Indiana, leaving Mose alone on the boat. The article went on to say that the body bore marks of violence, and the belief was that Mose had been killed and robbed. He was known to carry a large unmounted diamond, which he brought with him from Europe.

Mose was well liked by the community, and his Masonic lodge had scheduled a funeral after which they were going to give him a Christian burial. However, Siesel March advised the lodge the morning of the funeral that it was the desire of Felix Moses to be buried in a Jewish cemetery. The Lodge adhered to Mr. March’s request and Moses was buried in the Walnut Hills cemetery. The historian of the Lodge wrote that “sometime after his burial, a monument was erected in his memory; and, at a later date, dignitaries from the North and the South, as well as Christian and Jew, paid tribute to his memory (and may we add – He richly deserved it).” The Memorial Service was presided over by Rabbi David Phillipson of Bene Israel Congregation (now Rockdale Temple).