Home / Discovering Your Roots with JCGC

Discovering Your Roots with JCGC

Exploring our ancestry tugs on many of us, now more than ever. A gifted “23 & Me” kit promises to open up a world of coded genetic secrets about one’s people, stretching back to earliest times—or that’s what ads, articles and shows tempt us to believe. The DNA results we get back are fascinating, but impersonal. What were our ancestors’ names? Where exactly did they live and die? Seeking more detailed family stories, many of us have also gone down the rabbit hole of Ancestry.com with tantalizing results.

But for some of us, especially those whose Jewish family just arrived in America around the turn of the 20th century, the ancestral trail goes cold after only a couple generations. Are we doing something wrong? 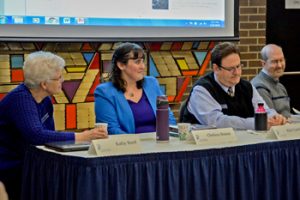 “Maybe, but probably not!” was the frustrating answer shared on the evening of January 10, 2019, by a panel of local experts on tracing our Jewish roots. The event, offered by Jewish Cemeteries of Greater Cincinnati in cooperation with Rockdale Temple, was the first of four quarterly lectures open to the community.

Over two hours, an audience of thirty learned a lot from four genealogists affiliated with the Hamilton County Genealogical Society and the American Jewish Archives and convened by moderator Caroline Sim, 2018-19 HUC/Jewish Foundation Fellow with JCGC. Listeners discovered that they aren’t alone in running up against apparent Jewish ancestral dead ends. Jewish genealogy, much more than that of other world groups, hides behind layer upon layer of very unique complications. The program’s final message: Knowing what those barriers and limitations are can arm us for greater genealogical success, or at least greater satisfaction.

For example, a curious person might begin by accessing at no cost the genealogical search resource available on the JCGC website (www.jcemcin.org), which JCGC Executive Director David Harris demonstrated screen by screen. On it the seeker can find info on their ancestors interred in our region’s Jewish cemeteries—photos of monuments, dates and places of birth and death, potentially their spouses’, children’s or parents’ names (including sometimes evidence of the Americanization of the family surname, by choice or at Ellis Island), and maybe even the ships on which earliest family arrived in America. This is an exciting and promising start!

But how to trace back farther from the names of those unknown great grandparents, aunts and uncles, cousins—to ancestors who most likely lived and died in The Old Country—countries in Eastern or Western Europe, Russia, the Middle East, South America or any of the other myriad homes of our Jewish Diaspora over 2000 years? Surely, with the help of DNA clues, computers and Ancestry, it’s possible to trace those names back much farther, right?

“Well, not easily, and depending on how driven you are, maybe not at all,” according to the evening’s first panelists, professional RN Rick Cauthen and music librarian Paul Cauthen. They were met by murmurs of audience agreement. The lively panelists took turns detailing barriers that most in attendance had encountered, but the full scope of which most didn’t understand.

Tragically, everyone searching for Jewish roots had expected to find one, two or even three generations of forever-lost branches cut from the family tree by the Holocaust. Although Hitler’s killing machine was perversely data-focused, even Nazi record keeping failed for vast numbers of the murdered. And when Jews’ identities and birth places were listed, the records of their former lives back in cities, towns and remote villages often still cannot be found, destroyed either during war violence or deliberately, after the war’s end, to hide evidence of Jewish property confiscation.

If indeed found, Jewish communal records are usually sparse due to the surprising fact that Jews, especially Ashkenazic Jews, for fascinating and complex reasons, generally have not kept detailed family birth and death records over the centuries. This, despite being “The People of the Book” and authors of the Book of Numbers! Add to the mystery the fact that widespread Jewish use of traceable family surnames (last names) only started fairly recently, within the last 300 years in Eastern European regions, and were often changed, either after forced conversion or in order to blend in better with populations that they found themselves surrounded by over time. Also, any governmental records you find on a single ancestor might be written in multiple languages due to shifting political boundaries (German, French, Polish, Ukrainian, Russian, Slavic etc.) and non-English alphabets (Cyrillic, Greek etc.). Of course, additional Jewish Hebrew names and related records might also have been kept in Hebrew, Ladino (Sephardic) or Yiddish. 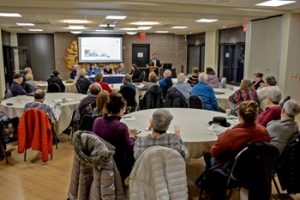 Paul and Rick spoke of all these barriers from personal experience, finally advising anyone contemplating staying on the trail in a foreign country to consider hiring an on-site native researcher, as they finally had, to look for documentation in offices and surviving cemeteries of likely ancestral towns—that is, once the specific place of an ancestor’s origin is “relatively certain.”

On the up side, though, history grad student and panelist Chelsea Simon emphasized that most of us have a rich resource of family stories and photos from which we can create “archival narratives” starring our own living or well-remembered relatives in the present and recent past. Chelsea told a funny and poignant family story which she has both written and audio-recorded concerning her own family. She encouraged the audience to draw out, cherish and most importantly somehow record those stories now, both for their own and for future generations’ appreciation and help. The color and intimate detail of collected family stories can offer breadth and warmth to the names, places and dates we do know, even if this is no replacement for the deep loss of our earlier generations’ stories, which may never be knowable.

Final panelist and genetic genealogist Kathy Reed warned the audience that the typical popular genetic test must be taken with a plate of salt and can be difficult to understand. DNA analysis is still limited by relative newness, the data pool size, narrowness of disease research focuses and the proprietary status of much of the technology. Some may shy away from DNA testing due to concerns over medical privacy, and even if one welcomes certain disease warnings given by DNA, popular tests do not reveal vast numbers of other potential health issues for which genetic markers are still being sought or too early in their use to be reliable (or cheap).

Panel convener Caroline Sim ended by moderating many audience questions for the panelists, then distributed a sheet of detailed genealogical resources to close out the event. The audience immediately regrouped into conversation clusters or sought out individual panelists to chat with before leaving. An audio recording of the evening is available on JCGC’s website, as is a list of resources compiled by Caroline Sim.

Together, Rockdale Temple and JCGC aim to educate and engage community members about issues related to Jewish cemeteries. Additional lectures in the four-part series include: Jewish Cemetery Rehabilitation in Europe – April 11, 2019; End of Life Planning – June 6, 2019; and Jewish Tombstone Iconography and Art History – September 12, 2019. All lectures in the series will be held at 7pm at Rockdale Temple and JCGC hopes you’ll attend!