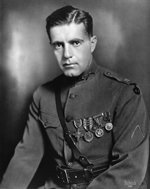 This year is the Centennial of the founding of DAV (Disabled American Veterans), the revered advocacy and service organization for America’s injured veterans. On September 8, 2020, representatives from DAV National Headquarters in Cold Spring and members of the DAV Department of Ohio honored the organization’s extraordinary founder, Cincinnati Judge Robert S. Marx, himself a highly decorated veteran severely injured on the final day of World War I. The solemn graveside event was hosted by Jewish Cemeteries of Greater Cincinnati, whose executive director David Harris served as master of ceremonies.

Judge Marx’s advocacy for disabled veterans was remembered and lauded in a wreath laying ceremony at his grave in Walnut Hills Cemetery. A uniformed honor guard of local disabled veterans set the respectful tone. Commander John Plahovinsak, DAV Department of Ohio, DAV National Adjutant Marc Burgess, and Dr. David Leist, Chaplain of Cincinnati’s U.S. Department of Veterans Affairs addressed the audience ranged up and down the slope where Judge Marx is buried in Walnut Hills Cemetery. The ceremony was private and masked, due to coronavirus concerns. The ceremony ended with a prayer, three rifle volleys and a bugler playing “Taps.”

“We think Judge Marx would be proud of the organization he and his fellow veterans started. He’d appreciate how inclusive we are and the progress we’ve made over these many years,” said Adj. Burgess. “Even now, 60 years after his death, his legacy lives on to help veterans of all generations get the health care, education and disability benefits they earned.” DAV membership now stands at over one million. 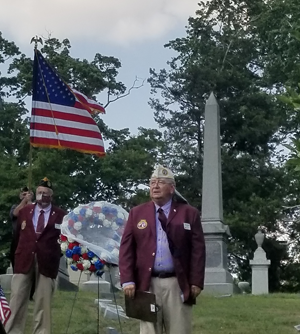 Early in the ceremony, Commander Plahovinsak proudly announced DAV’s application to the United States Army to have Judge Marx’s Distinguished Service Cross, second highest military award, upgraded to the Medal of Honor. The decision on this will likely come in 2022.

Founding DAV in 1920 here in Cincinnati could be considered the crowning achievement of Judge Marx’s national career in law and jurisprudence. Born in 1889 in Cincinnati, Judge Marx graduated with honors from Walnut Hills High School and the University of Cincinnati College of Law, where he also served as captain of the football team. He enlisted in the Army in 1917 and was gravely injured by a German shell on the final day of the Meuse-Argonne offensive, just hours before the Armistice.

Once home, and still recovering, Marx was appointed Judge of the city’s Superior Court, the youngest yet named. America was struggling with the 1918 influenza pandemic and had inadequate and fragmented veterans’ services, unprepared to rehabilitate 220,000 injured veterans. Frustrated, Judge Marx organized a Christmas dinner for a hundred veterans in downtown Cincinnati where the founding ideas for a regional “DAV of the World War” were laid. It quickly expanded to a national framework in 1920, and Judge Marx was named DAVWW’s first National Commander. Today’s DAV continues the work he started 100 years ago. 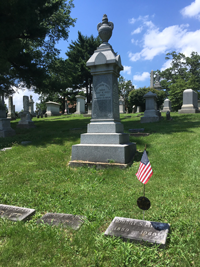 Judge Marx became a gifted educator at University of Cincinnati College of Law where his estate funded its Robert S. Marx Law Library as well as a continuing series of law guest lectures and seminars named for him. He died in his sleep in 1960 at age 71. More can be learned at www.dav.org : https://www.dav.org/learn-more/news/2020/judge-robert-s-marx/.

Jewish Cemeteries of Greater Cincinnati is honoring every veteran buried in its 25 cemeteries with flag grave markers, an effort spearheaded by Springboro Eagle Scout Ethan Zied. Veteran memorials are also maintained in several of JCGC’s 25 cemeteries. JCGC welcomes donations to these ends at their website, www.jcemcin.org.