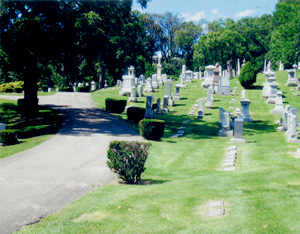 The English immigrants who bought the land for the Chestnut St. cemetery, Joseph Jonas and Morris Moses, were among the small group of Jews who, in 1824 — three years after the cemetery was created — formed K. K. Bene Israel – the Holy Congregation of the Children of Israel – the first Jewish congregation west of the Alleghenies, today known as Rockdale Temple.

About 13 years later, K. K. Bene Jeshurun was formed as the second congregation in town, by a group of German immigrants, some of whom had belonged to K. K. Bene Israel.

A third congregation was created in 1847 by a group who felt there should be a shul in the upper part of the city. They called it Ahabath Achim – the Society of Brotherly Love. Some of the congregants’ names are familiar today – L. Goldsmith, Samuel Weil, Charles and Henry Kahn, M.W. Fechheimer, and I. Bloch.

Even before building a synagogue, they started talking about buying land for a cemetery, and formed a committee to search for land.

Charles Kahn, one of the founders of Ahabath Achim, was a successful businessman. He and his family decided to follow the lead of other wealthy Cincinnatians, and he bought three acres of land on Ludlow Avenue in the village of Clifton, about five miles from the basin area where most Cincinnatians lived. After all, the coal and wood fires from all the growing industry made breathing pretty difficult in town, so those who could afford to moved to the suburbs, and took the new iron horse into town to work.

The tale is told that Mr. Kahn sent plans for his intended hillside home to the village authorities for approval, and at a council meeting a few days later, a lot of time was spent debating whether the village could (or should) exclude Jews. Ultimately, the village solicitor persuaded some of the more influential citizens to try to accomplish the segregation of Clifton by indirect, rather than direct means.

The next day, a self-appointed committee of “gentlemen” – including Tyler Davidson, whose home was (and still is) directly above the Kahn land – visited him at his place of business. They did everything they could to subtly persuade him that he didn’t want to build his home there, and that his family wouldn’t be happy in Clifton. Mr. Kahn argued that indeed he did want to build there, and his family was excited about living in Clifton. Finally, so the story goes, one of the visitors stopped beating around the bush, and told him that the residents of Clifton didn’t want any Jews living there. 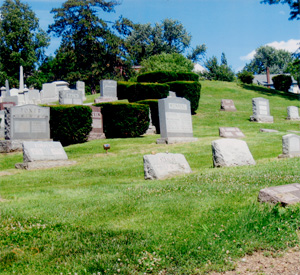 Well, Mr. Kahn decided to please two groups of people at the same time. First, he decided not to risk being ostracized and hated by his new neighbors in Clifton, and called off plans to build his home. Second, he went to the cemetery committee of Ahabath Achim and sold them his three acres. And then, according to legend, he sent a note to the businessmen who had visited him and told them: “If you do not care to have a Jew living near you, you cannot object to dead Jews, and you shall have many of these, for many years, in no condition to offend you.”

So was born the JCGC site in Clifton. There are approximately 1,850 burials in the cemetery. About 15 years ago, approximately 200 unsold sites were taken off the market, as a portion of the hillside had become unstable. There are only a few sites still available. The cemetery remains a peaceful hillside setting in the middle of a quiet neighborhood.

What happened to Ahabath Achim? Well, in the 1860s it began to follow some of the Reform practices that were expanding in Bene Israel and Bene Yeshurun. In 1872, an organ was introduced, and the congregation took a posture somewhere between strict Orthodox practices and the Reform approach to Judaism.

But as times changed, Ahabath Achim found that they could not exist separately, and they merged with Congregation Sherith Israel in 1906. The merged congregation continued until 1931, in a new building — the Reading Road Temple, in South Avondale, when the congregation merged yet again with Bene Yeshurun, and formed The Isaac M. Wise Temple. Reading Road’s rabbi, Samuel Wohl, became the senior rabbi of the new 900-family congregation.

From the 1931 merger until JCGC was formed, Clifton was operated by United Jewish Cemeteries, an association formed by Bene Israel and Bene Yeshurun in 1850.