Home / Heroes Among Us: Bernard Marks

Heroes Among Us: Bernard Marks 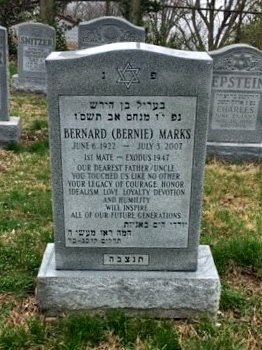 In the Tifereth Israel Cemetery, a section of the Covedale Cemeteries, lies the final resting place of one of the quiet heroes of a turbulent part of Jewish history. Bernard (Bernie) Marks was a Cincinnatian who spent three years of World War II serving in the United States Merchant Marines, bringing much-needed material for the war effort across the Atlantic Ocean. When World War II ended, Bernie planned to return to normal life. Instead, a detour would delay those plans for several more years.

After the war, Bernie enrolled in University of Cincinnati. While there, he met another student named Hugo Schwartz. Schwartz was an ardent Zionist with connections to the people involved with so-called “Aliyah Bet,” which was the name given to the initiative to smuggle Jews, mostly Holocaust survivors, through the British blockade into Israel. Anyone Jewish with sailing experience was a big find for the organizers. Schwartz told his contacts of the young man he had met in Cincinnati, and Bernie soon received a call from the radio operator of a ship, the “SS Haganah,” which was being outfitted to run the blockade. Though fresh home after three years on the Atlantic, Bernie picked himself up and traveled to New York to join the effort to help his fellow Jews.

Bernie’s voyage with the SS Haganah as second mate was successful as they brought over 2,500 people to Israel. The fact that they made it safely, beyond just running the blockade, was an amazing feat, as the ship was so overloaded and top heavy that the pilot who guided them out of their European port thought they had no chance of even crossing the Mediterranean Sea. Upon arrival in Israel, Bernie was still not out of danger, as he had to hide from the British and was soon smuggled back out of the country.

Mission successful, Bernie once again returned home to Cincinnati for a few months when adventure came knocking with another request from Aliyah Bet to join another ship on its way to Israel. The ship’s name was the “Exodus 1947.” This time Bernie would be first mate and would spend 9 months in that position. The Exodus was also dangerously overloaded, as it had been certified to carry 350 people before it was sold for scrap and was now carrying upwards of 4,500. The British spotted the shipped, rammed it, and boarded. Initially, the British met with resistance when they boarded. But when the British sailors opened fire and someone was hit, Marks surrendered the ship to prevent further bloodshed. Bernie was arrested with the rest of the crew and was held for three months in a prison camp, before he was deported to America.

Bernie was still not finished volunteering for his nation. In 1948, he joined a crew that sailed a retired U.S. Navy patrol craft from Mexico to France so that it could be used for the new Israel Navy, which also carried a cargo of illegal arms for the Haganah. After that sailing, he volunteered for service as a paratrooper with the Israeli Air Force. His first jump was made after an hour of instruction from a friend who had been a paratrooper with the 82nd Airborne in World War II. In the end he did not see any active service before the ceasefire that ended Israel’s War of Independence.

Bernie would end up taking part in several more sailings of refugees from Europe to Israel before finally returning to Cincinnati and the continuation of a life interrupted. Even then, however, his spirit of doing for his fellow Jew continued as he spent several years fundraising for the United Jewish Appeal.

It is possible that the most fitting tribute for this man would be his own description of what motivated him to endanger his life to help his fellow Jew. In an interview with the Cincinnati Post and Times-Star in 1961, Marks said, “I just wanted to help those fantastically courageous Jews from the death camp… It was something we had to do. Here were all these people – my people – that no country would accept. They had undergone hideous experiences – but don’t ever call them pitiful, for they weren’t. They were tough, and courageous, and determined, and fantastically brave.” Bernard Marks was a hero and an example in self-sacrifice for another Jew, and we here in Cincinnati have the honor of being the home of his final resting place.